How to Stop Unscheduled Mold Stops 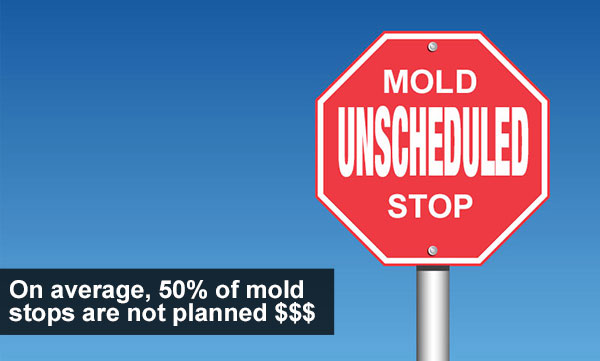 The ultimate goal of every molding company is to produce quality parts on time. To this end, the daily workload of most shops consists of doing whatever it takes to satisfy production demands and, when times are slow, few companies use the downtime to “get ahead” in the tool room. Instead they wait until business picks up again to deal with any tooling issues.

How can one begin to use valuable time more effectively? The best and quickest way to be more proactive performing regular PM’s, Defect Targeting, mold evaluations, etc., is by attacking the most basic and overlooked reason for added work in the first place – unscheduled mold stops.

There are only two classifications that should be used to describe why a press stops: 1) Scheduled; 2) Unscheduled.

This Mold Stop Ratio for world class tool rooms (notice I did not say “companies”) is typically about 90% to 10%. However, most companies fall into the 50% to 50% range. For these companies there is huge potential for making up time, saving money and making an immediate impact.

So Why Doesn’t Everyone Monitor this Ratio?

The problem is that most companies don’t use standardized terms on the molding floor, nor do they differentiate between scheduled and unscheduled mold stops. This really adversely impacts systemization and the ability to be able to track anything accurately and efficiently.

When standardizing Mold Stop Reasons it’s best not to get too detailed with them. Limit your descriptions/reasons to a maximum of two or three words.

For example, it makes sense to use the term “Flash Issues” as the primary reason for a mold stop versus a random journal entry that might be very detailed but, in most cases, is usually obscure and not at all useful. To prevent the Mold Stop Reason list from getting too long and cumbersome, it’s best to record those “next level” shop terms (such as which cavity or what kind of flash) under “Defects” to understand exactly which mold position or cavity number was flashing.

Using Excel or another, similar database program, draft a list titled “Mold Stop Reasons” and include not only mold problems, but anything that might stop the press.

To allow for faster sorting of terms, be sure to put a capital “X-” in front of any reason that is considered Unscheduled. Most companies will end up with 30 to 50 Mold Stop Reasons at the molding floor level, then with more specific terms such as “Flash Spout Tip” at the repair shop level.

Following is an example of some mold stop listings for a company and the explanations that automatically pop up in their MoldTrax software system. Everything at the top of the list is a “Scheduled Stop” reason. Notice the “X-” code for “Unscheduled Stop” reasons. 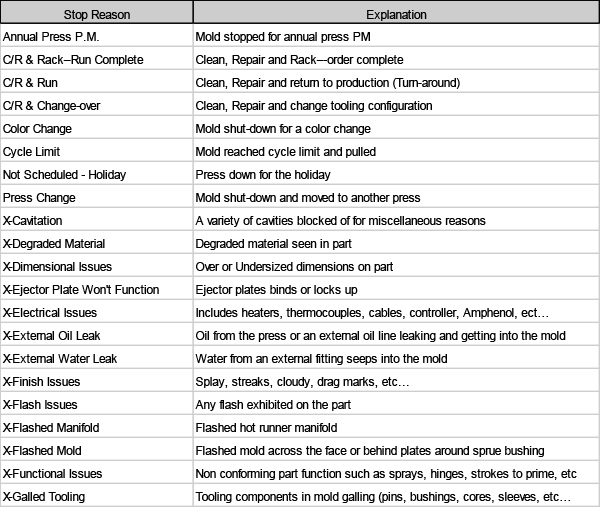 Once these mold stop reasons are being tracked, it is both amazing and enlightening to see what really shuts down your machines and the frequencies at which it happens. Collect this data for a few weeks and target the mold issues. Often, some issues resolve themselves as a result of making them “public”.

Below is a sample report of the Top 15 Mold Stop Reasons that one company tracked and then took action on, saving thousands of dollars in tooling and man-hours, and freeing up time to be more proactive in the tool room. They went after the X-Unscheduled Stop Reasons shown in red and made a $50,000 impact in less than six months. The 350+ man-hours can now be put toward more proactive work, and new targets set every quarter. 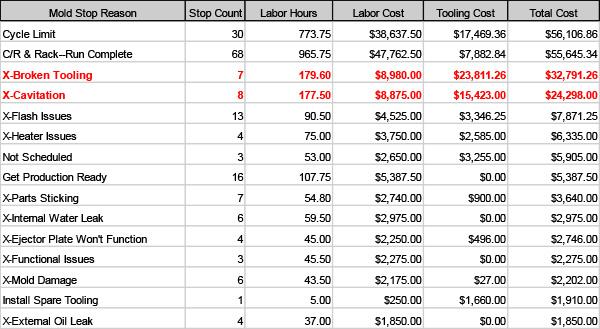 Unscheduled Mold Stops are estimated by manufacturing experts to cost companies FIVE times as much as Scheduled Mold Stops. The ability to measure and target your Unscheduled Mold Stops can save your company hundreds of thousands of dollars per year – and in some case even millions of dollars. Our inability to accurately track mold stops is the direct result of using a data system that requires journal entries when documenting maintenance. We MUST create and use standardized terms. Without these, our data collection effort is just more money down the drain.