Purging Compounds: Cost per Pound vs. Cost per Purge 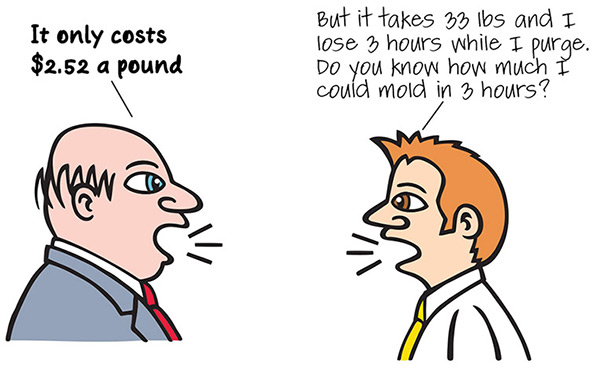 The production manager at a medium-sized injection molding plant was testing different products to eliminate streaking and shorten purge times. His current purging process used 33 pounds of purging compound. The purging process took 3 hours and required over a dozen shots to be reviewed by Quality Assurance before he could get his machine back into production.

After several rounds of testing with a new purging compound he found he could reduce the amount of purging compound to just 9 pounds. He also would shrink the purge process to only 20 minutes instead of 3 hours. Plus he now required only 6 shots to be tested before he could start full production.

Success. He used less purging compound. He was able to add 2 hours, 40 minutes of production time. And he eliminated streaking.

He went to purchasing and requested to start buying the new purging compound.

Why was the higher cost/pound for this new purging compound cause for getting turned down by purchasing? The purchasing agent was not aware of the problem with streaking, nor of the initiative to fix it until the very last minute. All he had to go on was price.

The disconnect between the floor and management

A good purchasing agent can save their company a lot of money. Sourcing product, negotiating prices and managing expenses are all important. However, if they don’t have an understanding of the manufacturing process and the increased revenue gained with more uptime, they won’t get on board with a higher cost product.

In the scenario above, if management, including the PA and Plant Manager, was notified of the initiative to fix the issue of streaking and downtime they would not have been blindsided by a request to spend more on a purging compound.

Another reason for saying no was “the people on the floor would still use the same amount of purge compound they always have, 33 pounds at $4.01/pound, costing us more.”

Again, this is the perspective of someone charged with saving the company money. Of course the plant would institute new purge procedures. But from the perspective of the PA, he was trying to be realistic about what happens on the floor. However, unlike the past, many PA’s are now hired from outside the company and have not spent years on the manufacturing floor.

Purging compounds are not a commodity

Buying a purging compound is a bit different than buying many other products you get in bulk. Looking at a cost per pound is too narrow a parameter. Many purging compounds can’t be pigeon holed as a commodity.

In this instance, the higher cost per pound was more than justified, not only because far less compound was used, but also because machine productivity was dramatically increased. In fact, the calculations for changing the purge process had the following benefits:

1) An increase of 160 minutes of productivity per day, per machine

Be inclusive with productivity issues

Purging is more than a cost-saving initiative. It is a revenue and productivity process. Eliminating quality issues and increasing machine uptime helps the company increase output. That additional 160 minutes per day per machine of production can translate into less overtime, quicker changeovers to new molding projects, or even reducing or eliminating the need to purchase new molding equipment.

So, in the future, include all the decision-makers as early as possible in the quality and productivity initiative. Helping them understand the problem and course of action helps them better understand all the cost-savings and benefits of a solution.