As most mold maintenance audits reveal, unscheduled mold downtime is most often due to an internal or external water leak. Many are caused by pinched, cut or missing O-rings, or other assembly oversights. Once O-ring glands are rusted and pitted, they can wreak havoc on molds, especially when proper corrosion prevention measures are not being taken. 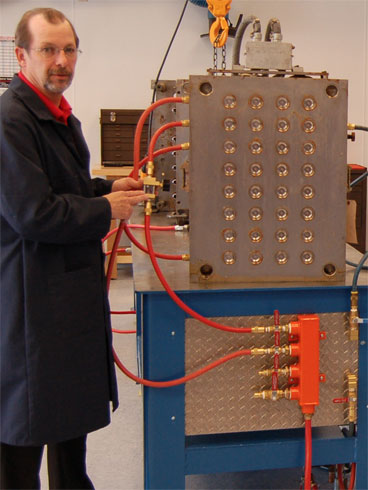 Ultimately, molds and components damaged by rust and pitting fail prematurely, resulting in expensive repairs or replacements. Add that to the cost of press downtime, scrapped parts and missed or late customer orders, and you have thousands of company dollars being wasted each year – all because of water leaks that could have been easily prevented.

Most of the water leaks in molds occur around static seals where dissimilar metals such as P-20 plates contact hardened steel tooling such as A2, D2 or S7. This dissimilar contact sets the stage for the formation of Fe203, the reddish form of iron oxide that we know as rust. The oxide is a larger molecule than iron, so it puffs up and cracks, exposing more bare metal. Mobile oxygen in the metal then moves deeper into the base steel, continuing the destruction.

In cavity blocks and cores, the walls and bottoms of glands erode until the O-ring can no longer conform to the depth of the pit and water seeps past. The leak gets even worse as the mold opens and closes. The action serves as a virtual pump, slightly moving or shifting tooling with every cycle while opening stress cracks that would normally withstand a static bench test of the circuits.

To get the mold back into production as quickly as possible, maintenance personnel focus on stopping the leak when instead they should be trying to eliminate the rust.

Calculating The Cost of Water Leaks

Unless there is viable ROI in correctly fixing leaks in a mold, no one is going to do it. The only way to justify repairs is to assign an accurate cost to each problem that a mold suffers.

That's exactly what one 20-press molder on the West Coast recently did. Over the past year, they documented all mold stops caused by internal water leaks. They then calculated how many hours of labor – and at what hourly rate – each mold stop incurred. They also accounted for other expenses, including tooling and press downtime. In the process, they made a startling discovery about the real cost of these water leaks to their facility.

But that was just the start. The time spent on unscheduled mold stops meant 173.25 hours of lost productivity due to press idle time; at $45 per hour, it totaled $7,796.25. An additional three hours of time per stop also were spent on pulling, resetting and restarting the mold, costing $4,200.00. The mold stops also accounted for $2,810.00 in unnecessary tooling expenses.

How to Stop the Leak

To prevent this problem from reoccurring, the molder went back to the Defect Analysis Report. They found that the 28 stops involved 14 different molds, of which two accounted for 36% of the leaks and their associated costs.

According to the Stop Reason Chart (below), the worst offender (mold #6169) accounted for six stops, so this was a good place to start. Further review of the Corrective Action history revealed the mold had four O-ring groove locations that were pitted and needed to be welded, re-faced, stripped and then re-plated in nickel. Welding and spot-facing was $675.00, and the nickel plating added another $300.00, making the total repair cost $975.00. Since production volumes were to remain constant in the upcoming year, the molder determined that the ROI for this repair would be approximately four months, justifying their decision to go ahead with it.

Now that there is one less issue to worry about, the molder can move on, one-by-one, to the next most frequent mold stop locations and continue until all the defects are repaired. Before long, the costs of unscheduled downtime will be reduced by 50% or more, ultimately saving them thousands of dollars in unnecessary expenses while increasing their capacity and reducing stress on the molding floor. What's more, the Defect Analysis Report is now being used as a guide in the tool room to help the molder aggressively reduce unscheduled mold stops in the future.

This molder's experience demonstrates why the cost of putting up with random water leaks is not necessarily less than eliminating them. When you add up all the costs that are involved, it becomes much easier to justify the decision to fix the mold and fix it right.

Get expert advice on ways to maximize your molding performance at NO CHARGE with our Top Tier Serivce. We are now offering: