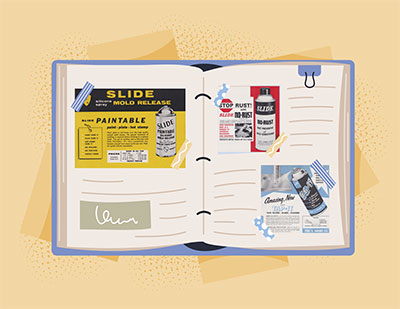 As the owner of Slide Products’ marketing partner, we recently had an opportunity to visit the Slide facility, in addition to one of their partner venues for a video and photo shoot. It gave our team the ability to get an inside look at the entire Slide operation and also seeing great, real-time demonstrations of their products on a working injection molding machine. The ensuing videos and images will be wonderful materials for use in our ongoing marketing, social media, web development and content creation efforts.

During the shoot, Michael Muth (Slide’s President & Sales Manager) brought out a cardboard box of advertising items and memorabilia that he had collected over the years. Michael asked me to take it back to our office and see about getting these relics sorted and digitized.

Now, as a guy who has been in the advertising industry for almost as long as these items go back, I found them extremely clever and fascinating. I had to assign one of our younger staff members, Jane Huske, the daunting task of sorting, scanning, photographing and digitally archiving these objects. Jane was also highly intrigued with the old pieces and really enjoyed working on the project!

Some of the messaging and slogans that Slide used even decades ago we found to be extremely clever and relevant to this day. Michael shared memories about some of the pieces. I am highlighting a few of these just to provide some perspective about Slide’s illustrious history.

Michael pointed out that the Aerosols for Industry ad amused him – how the original company name was actually Perc. E. Harms Company: “While his name was Percy Harms, he was worried people would pronounce it like ‘Perky Harms’, so the original company name was set as ‘Perc. E. Harms Company’. A few years later, once the brand was more established, the name was officially changed to Percy Harms, Corp. Then in 1994, we adopted the Slide trademark as our new company name, which it remains today. I also thought it amusing that the company used a picture of some large chemical-looking company or oil refinery to try to get the audience to think we were bigger than we were and this was also mentioned in the associated ad copy – ‘As you can see, we have grown tremendously in the 17 years…’”

Another of Michael’s favorites was a fun, attention-getting ad, “Good Ideas Under Pressure”. We learned early on in working with Michael and the Slide team that they love whimsical and fun elements, and we still try to incorporate those elements into the marketing we accomplish for them in 2022.

Below is a group of Percy Harms ads circa the 1960s and early 1970s. It’s interesting to see how much these products have changed or been replaced over the years.

It’s been a pleasure working with the Slide team – having the ability to be fearless and sometimes lighthearted in our marketing approach. I hope you’ve enjoyed taking a brief journey with us into Slide’s rich advertising history. You’ll start seeing the results of our video shoots coming up soon, and we’ll be featuring other items in the coming months on our social media channels, with some interesting stories about the pieces, so stay tuned!